Given the absurdity of my previous posts, it could seem somewhat odd that I am going to take a serious moment but the subject of my post deserves to be void of hyperbole and invention because it is just so darn brilliant.

So, the story goes like this. I randomly clicked a Facebook ad- which I normally never do- for a young photographer based in the inner-west, because it looked interesting and I wanted to find someone who had a good instinct for shots so we could do album artwork that didn’t involve trawling Google Images and then spending subsequent weeks trying to find the owners of the images to use permission. That photographer was Lina Hayes, a 21-year-old legend with an eye for landscapes, sunsets, and silhouettes.

So we emailed back and forth a bit, regarding projects and availability and other such things related to band and album photography. Since we weren’t even going to start recording until after Pat finishes getting his house built- which, at the current rate, will be September 2017- I figured it was more about identifying a talent and coming back to the whole situation in a few months’ (or years, depending on builders) time.

Periodically, I’d come back and look at the latest pictures. Pop a comment up, click away, maybe come back a couple of days later.

It was one of those days later when I saw this photo: 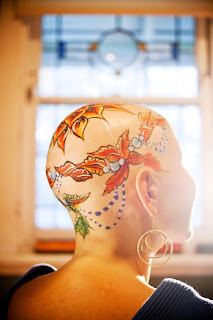 Amazing or what? Lina and Helen for the win! Photo (c) Lina Hayes Photography

That photo was the first in a series that were done for a project with Helen Beasley from Rainbow Face Painting and Body Art. The project was called Turning Heads.

Now, I wasn’t sure what this was for at first. Was it part of some monastic tradition? But then I found out that no, it wasn’t. The baldness of the women in question was not a choice, but a condition known as Alopecia Totalis, and the project was aimed at creating something innately beautiful to help these women feel special, unique, and amazing, turning their heads into an amazing canvas and creating art that reflected them personally.
Alopecia Totalis is contrasted to Androgenic Alopecia, or pattern baldness, or as I refer to it, “having kids”. Tristan is always keen to point out my lack of hair compared to his strong, thick and flowing locks, but given my work with teenagers over the years, I assured him I had already had it pointed out plenty of times.
Alopecia Totalis, however, was the complete loss of all the hair from the head (well, not the eyebrows), and could effect any age.

Next came this article in the Hornsby Advocate and as I read about Stephanie, who was diagnosed in year 5 and was now in year 8, I was struck by the images themselves. So great a blow to the confidence of the subjects had been dealt by the condition that many avoided going out because, well, it caused stares, but the amazing canvas that it enabled them to be, and the joy that was captured in the photos as for a moment their heads were in fact the perfect subject for the art, was in that moment a glimpse of another kind of value.
Finally, Lina put up some shots of a 2-year old girl. Little Jono turned 2 in March and this little girl had a similar vibrancy and joy as he has; she took the condition in her stride, unaware of any difference. The photos really captured the fierce joy, although this one is my personal favourite: 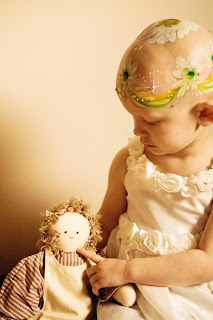 The shots moved me in unexpected ways as according to my wife, I don’t have things known as “feelings”, whatever those are. Something about the project really created an amazing connection, and as I read the girls’ stories, I gave pause to reflect on how we automatically attribute our definitions of beauty to the exterior, how flawed our assessments of other humans can be.
For those who don’t know, I have three kids, Ben (9), Tamara (7), and Jono (2). As I looked at these girls, and read their tales, I felt enormous sadness for the circumstances we find ourselves in in our human condition, and I wondered what I could say that would make a difference. So I sat down and started writing a song, and then dragged Tristan over to help me push through writer’s block. In 40 minutes, the song was done, and entitled All Of The Strands.

We’re doing some work on it and will be aiming to record it in July, to pass on something encouraging to these women. But as a sneak peak,  thought I’d include the bridge lines below:

Are you simply a picture, with warmth and a smile,
The depth and the beauty of somebody’s child?
You knew they were looking, but did they see more
Than all of the strands as they fell to the floor?

But in the meantime, please can I encourage you to go along to Lina and Helen’s Facebook pages, find out about the project, and make sure you share it with your friends. There’s something uniquely beautiful about it, I suppose because it creates beauty out of an ugly situation, and creates joy in the midst of sadness or resignation. There may not be a specific cure for it at this point in time, but perhaps the opportunity to celebrate a different kind of beauty is cure enough; perhaps it is we who need curing.

UPDATE: Tristan and I are going to record a demo of it this weekend which I'll try to get up on our site as soon as I have a moment. Stay tuned! Then we'll record the proper version with the rest of the band when Pat is back from Korea and the next gig is out of the way.